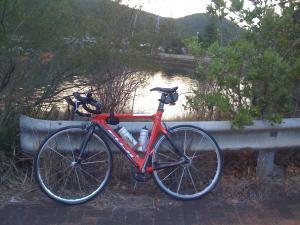 After going on a few group rides, and giving some of the faster rides a shot, it became clear that I needed a faster bike. At the time I was very sceptical about the concept of a road bike being faster than a mountain bike, after all they share the same concepts - two wheels, a frame, a rider. So it took literally ages to convince myself that an upgrade was necessary.

Almost a year later it was clear that a road bike is so much better. Where I was maintaining 30km/h on the mountain bike I can do close to 40km/h. The averages have creeped up a bit and the nimble handling makes riding feel safer and more controlled. The mountain bike rarely gets used these days, even for sommuting. It's like comparing a ferrari to an old truck.

At any rate, the road bike is a Fuji SST 2.0 - SST standing for "Super Stiff Team" - The frame is rather stiff but still comparable to the steel frame, at least in lateral flex. The real difference comes in sprinting - all the power goes straight to the back wheel and the feeling is super. It's like taking off in a rocket ship.

Since the purchase, numerous upgrades have been undertaken; the ritchey pro handlebars were replaced with some FSA compacts, whilst being heavier they have a much more comfortable position in the drops. The bar tape was also changed from gay white to stealth black. The Rubino Pro tyres that came with the bike barely lasted a month before the rear was destroyed (literally) by a piece of glass. Flimsy and slippery as they were, the tyres were replaced with nothing else but Continental GP4000s - they are absolutely the best tyre - good in wet and dry conditions, they roll smoothly and have this wonderful hissing sound on the road.

Lastly, the Mavic Ksyrium Elite wheels gave me problems where a rear spoke broke for no real reason in the middle of nowhere with only about 5000km and a couple of services done to the wheels. Leaving me to struggle home with the wheel wobbling like mad (about 3-4 cm of wobble!). Real disappointing as they were, they were replaced with a set of hand-built Mavic Open Pro/Ultegra wheels that feel absolutely perfect on road and roll to no end compared with the Ksyriums. And cross winds are an issue from the past.

I couldn't ask for a better bike. I'm sure the time will come when it needs replacement but that's a few years away. I hope.